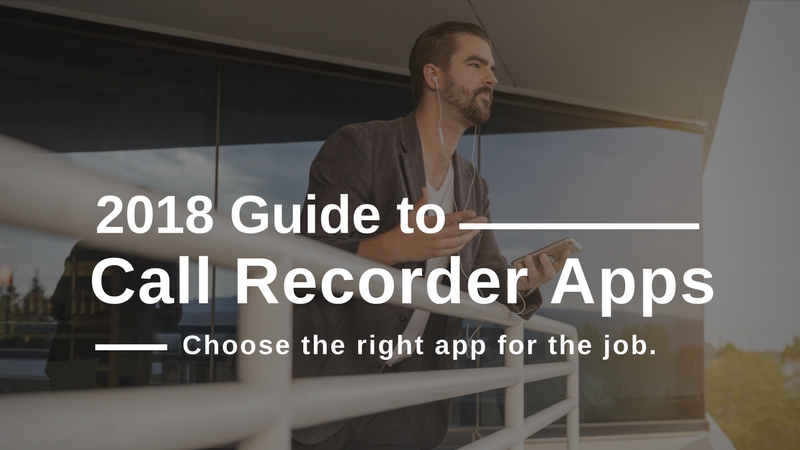 Phone technology has advanced from brick phones to smartphones, and call recording has improved along with it.

Today in 2018, call recording apps are the best way to record and playback any phone conversation you have on your phone.

So whether you’re a journalist who relies on playing back phone interviews or you merely want to remember conversations with loved ones, having a reliable app to record phone conversations and listen to them is a must.

Not All Recording Apps Are Created Equal

It turns out, people want a little more out of their call recording apps, like the ability to send recordings to their email or Dropbox, for example. Imagine that!

When you’re looking for a call recording app, here are a few essential features you want to look for.

Highly Rated with Lots of Reviews

App reviews are one of the best ways to separate great apps from the bad because they come from real people who’ve used the app. Thankfully, the App Store makes it quick and easy to see an app’s rating and how many ratings it’s received. The best apps have a 4.5 to 5-star rating and more than 500 reviews to be trustworthy.

Some apps put a cap on the number of recordings you can make and how long each recording can last. Others require you to buy credits that you burn with every minute of recording.

You might have planned for a 30-minute meeting, but what if it runs longer than your call recorder allows or costs more credits than you have? Unlimited recording isn’t just a safe bet, it’s essential.

No Per Minute Fees

Some apps seem cheap at first, but require credits for every minute you record. If an app charges you $0.70 per minute, a 30-minute phone call cost $2.10.

That may not sound like much at first, but after just five conversations you’ve paid $10.50 (more than twice what unlimited recording apps cost per month). It adds up quickly! We recommend using an app that doesn’t cost you per minute.

“Can I hang up and call you back so I can record this call?” It’s awkward. The best recording apps work both ways.

Whether work or personal, your conversations belong to you and you should be able to download and listen to them wherever you want.

Many people use Dropbox, Google Drive, Evernote, and other cloud services to store their most important information – photos, documents, and work. Phone conversations are also on that list.

The best apps allow you to share recordings with whatever other apps you want.

Realizing you’re listening to the wrong file 7 minutes into a recording is infuriating. The ability to rename your recordings with custom labels is essential if you record more than one conversation.

Conversations are a very personal thing. If an app doesn’t have a privacy policy for how their company and app will manage who can (and can’t) access a recording, run away!

The Best Call Recording Apps of 2018

TapeACall remains the easiest call recording app to record your calls and offers a 7-day free trial with unlimited usage of every feature on the checklist, including infinite call recording length and unlimited recordings. It’s also available in 33 languages.

At this point, you probably think we’re biased since this is our app. Here’s the thing, we’ve been on a mission for a long time to create the best call recording app possible. Period. We’re confident we’ve achieved that mission, even as we continue to improve the app.

We get it, though. That’s probably not enough to convince you. That’s fair.

So we’ll leave it up to the rest of the world to decide. Here are a handful of call recorder app reviews from the last 12 months and what they had to say about TapeACall.

“TapeACall Pro has long been a favorite among journalists. Why? The $10 app, available on both iOS and Android, makes recording as simple as setting up a three-way call.”

“TapeACall Pro is $9.99 annually—users get charged again every year, but call recording length is unlimited.”

“TapeACall, one of the best call recorder for iPhone, record both incoming and outgoing. You can transfer call recordings from the TapeCall server to new devices; download to your computer, or upload these call records to Dropbox, Evernote or Google Drive.”

“It doesn’t have the most elegant name we’ve ever seen, but TapeACall Pro (iOS, Android) is nevertheless a solid call recording program that gives you just about every feature you could want and then some, from saveable MP3s to straightforward setup and use.”

“It honestly works better than any other app I’ve tried.”

“TapeACall Pro is the best of the bunch when it comes to iPhone call recording apps. It works beautifully and reliably, with an easy-to-navigate interface and solid operation.”

“TapeACall Pro is probably the best call recording app which you can use today. The app makes it pretty simple to record any calls.”

“TapeACall Pro is a paid yet titles as a number one business app in many countries. TapeACall sets you free on how long you can record a call and lets you transfer the recording to new devices. You’re allowed to upload recording to cloud storages…”

“TapACall Pro Call Recorder – This is one of the best phone call recording apps on the Appstore and it comes with lots of features.”

“TapeACall Pro is the best call recording app for iPhone.”

Just to prove that TapeACall is the best iPhone recording app around, here are other call recorder apps.

Call Recorder Pro offers similar features as others on this list. However, the app uses credits. You can purchase a Premium Upgrade, but will need to buy additional credits. Last year PCMag wrote, “Call Recorder Pro is $9.99 just once but offers only 300 minutes of calling credits; users have to make an in-app purchase to record after that—and the credits are 10¢ per minute. Recordings are limited to 2 hours.”

As we said earlier, you can’t always predict how long phone conversations will last and don’t want to have to buy additional credits to complete a recording or have it capped off early.

Call Recorder Unlimited is a simple to use app that uses 3-way calling the way many other call recorder apps do, so you’ll want to make sure your cell service provider supports 3-way conference calling. Their features hit all the marks: unlimited recordings with unlimited length (once you upgrade to the paid version), full playback, and the ability to share recordings with all your favorite apps.

To give you peace of mind that Big Brother isn’t looking over your shoulder, Call Recorder Unlimited provides a link to their privacy policy right in their App Store page.

Google Voice includes a suite of call features, not just call recording. Because of this, it isn’t as focused as the other apps in this list and has some limitations. The first major downside of Google Voice is that call recording is limited to incoming calls only. There’s currently no way to record outgoing calls.

Another fundamental difference: Google Voice sends recordings to your email and stores them in the same list as your voicemail rather than a different section.

For the foreseeable future, Apple isn’t planning to add call recording features into iOS 11 or the upcoming release of iOS 12 and next iPhone, which means call recorder apps are the best solution to record and playback your phone conversations in 2018.

Of course, not all apps are the same. Knowing which features you need will help narrow down the list. Some of the features people use most look for include truly unlimited recordings and sending recordings to Google Drive or other cloud storage.

Moreover, the best apps are loved by customers, which means lots of app reviews. Apps with more than 500 reviews with a rating of 4.5+ stars have earned enough of customers’ trust to be worthy of yours.